Once you’ve created a scenario, you may be interested in receiving updates about scenario activities, such as model training or changes in data quality.

Dataiku DSS provides the ability to add reporters which can send these updates, and actionable messages about scenario activities to users. Reporters can be set up to auto-trigger and send messages to email addresses or messaging channels such as Slack, Hipchat, Microsoft Teams, and Twilio.

Before beginning the hands-on portion of the tutorial, you can watch the following video, which walks through the outline of the steps. In this tutorial, you will learn the basics of creating reporters that send updates about scenario activities. These reporters will send messages:

From the DSS homepage, navigate to the project you started in the previous lesson. For this tutorial, we will continue to work with the scenario Rebuild data and retrain model that was created in the Automation tutorial.

From the Jobs menu in the top navigation bar, select Scenarios and open the Rebuild data and retrain model scenario. 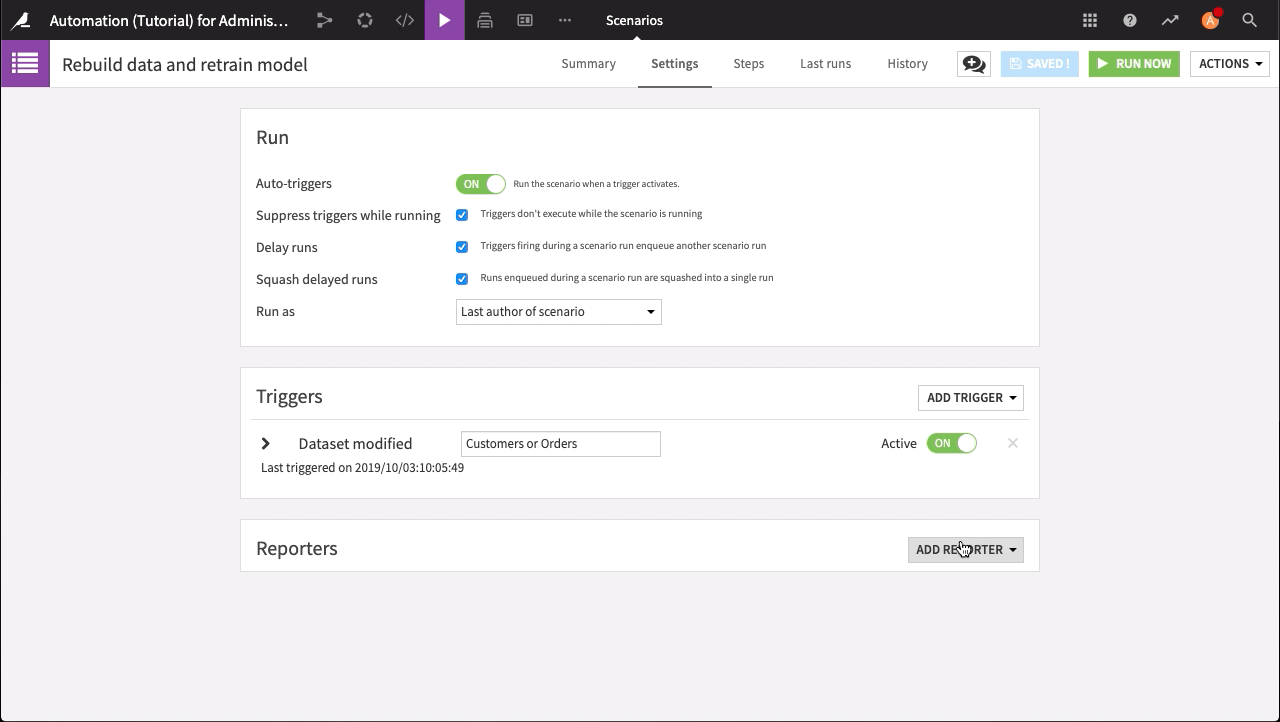 Create a Reporter to Send a Message When the Scenario Starts

In this tutorial, you will connect DSS to the Customer Churn Analysis channel, by means of an incoming webhook connector called DSS Scenario Reporter. Using this connection, DSS can post notifications about the scenario’s activities in the channel.

You create reporters on the Settings tab of the scenario. Say you want to create a reporter that sends messages to the Customer Churn Analysis channel at the beginning of a scenario run. In the Settings tab:

The reporter is now ready to use. To test it, click Save and Run Now. 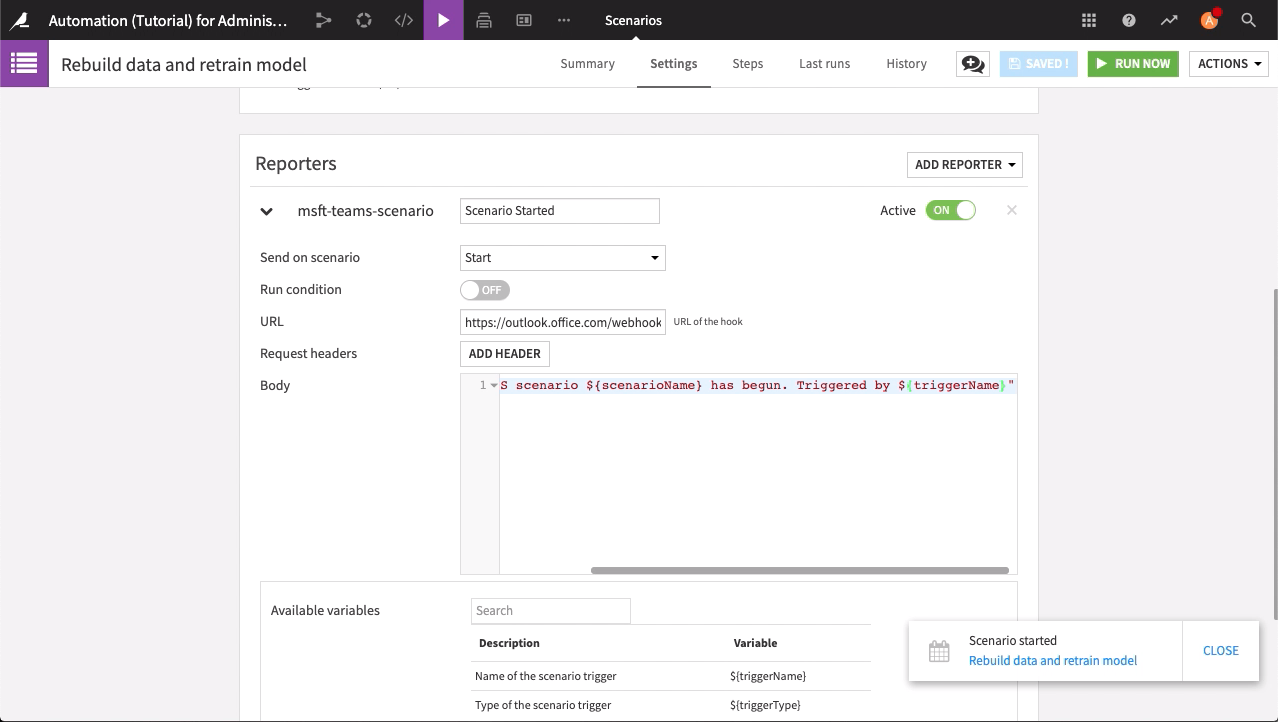 When you return to the Customer Churn Analysis channel of Microsoft Teams, notice that DSS has sent a message to the channel, stating: “DSS scenario Rebuild data and retrain model has begun. Triggered by Manual trigger”. 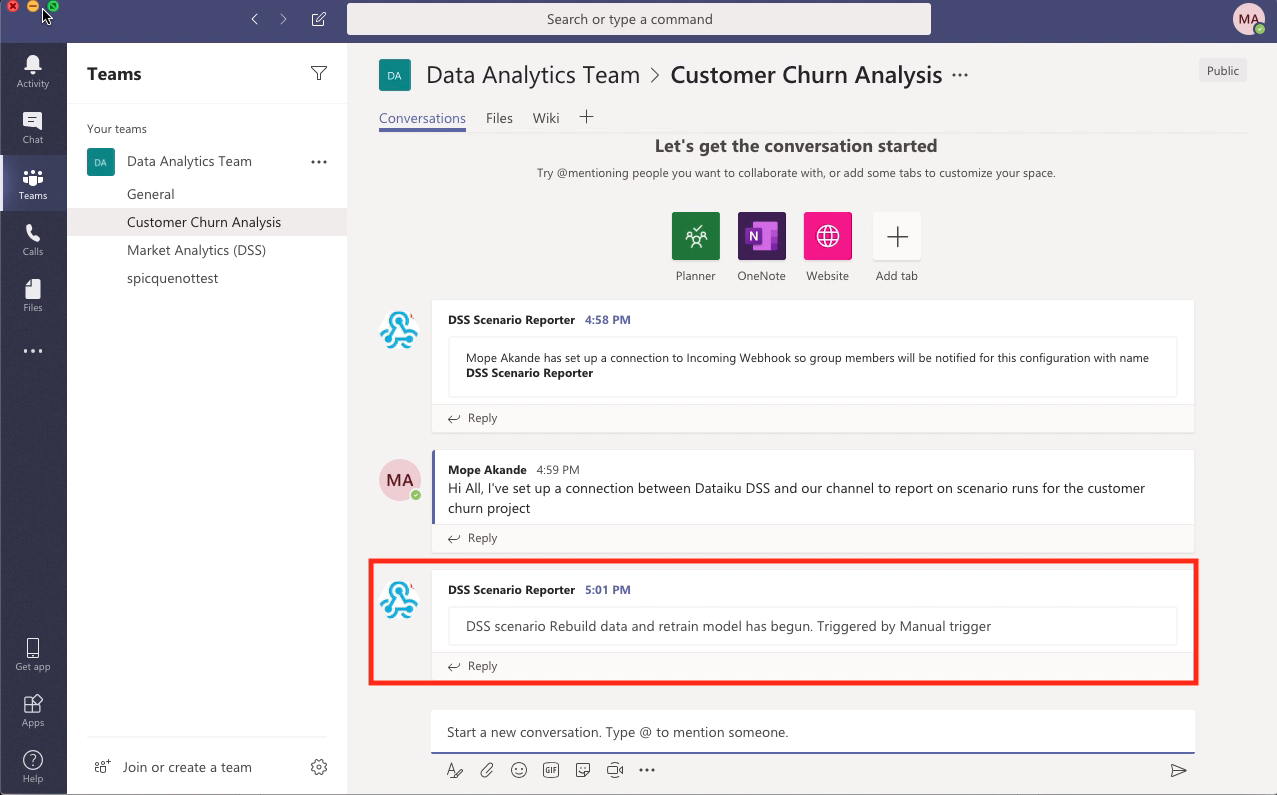 Create a Reporter to Send a Message When the Scenario Ends

It is also useful to send notifications of scenario results, for example: to send a message if a scenario fails. Let’s configure a reporter to do just this.

To create a reporter that runs when the scenario ends: 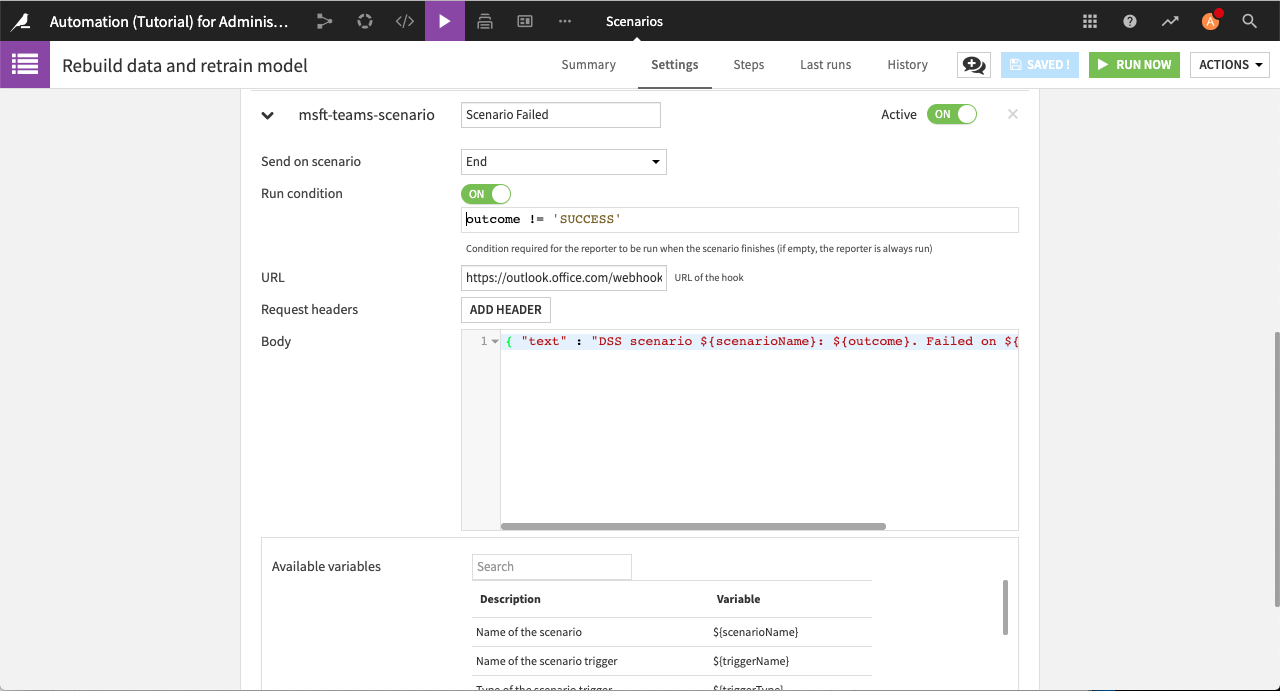 Now that you’ve configured the settings for the reporter, the next thing to do is trigger the reporter This way, you can test that it works as it should, when the scenario fails.

In the monitoring with metrics and checks section of the previous Automation tutorial, we enabled the Records count metric to automatically compute after building the Orders_filtered dataset. 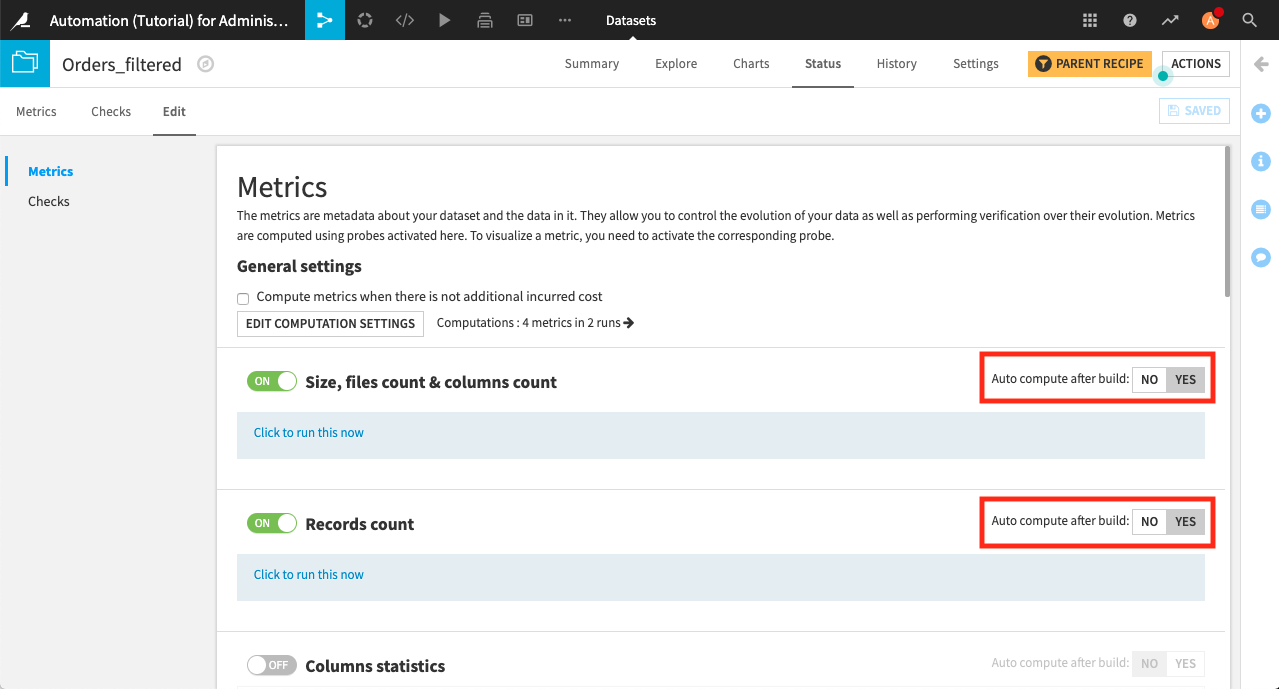 We also created a check that issued a warning if the Record count (representing the number of new customers in the dataset) was less than 170. 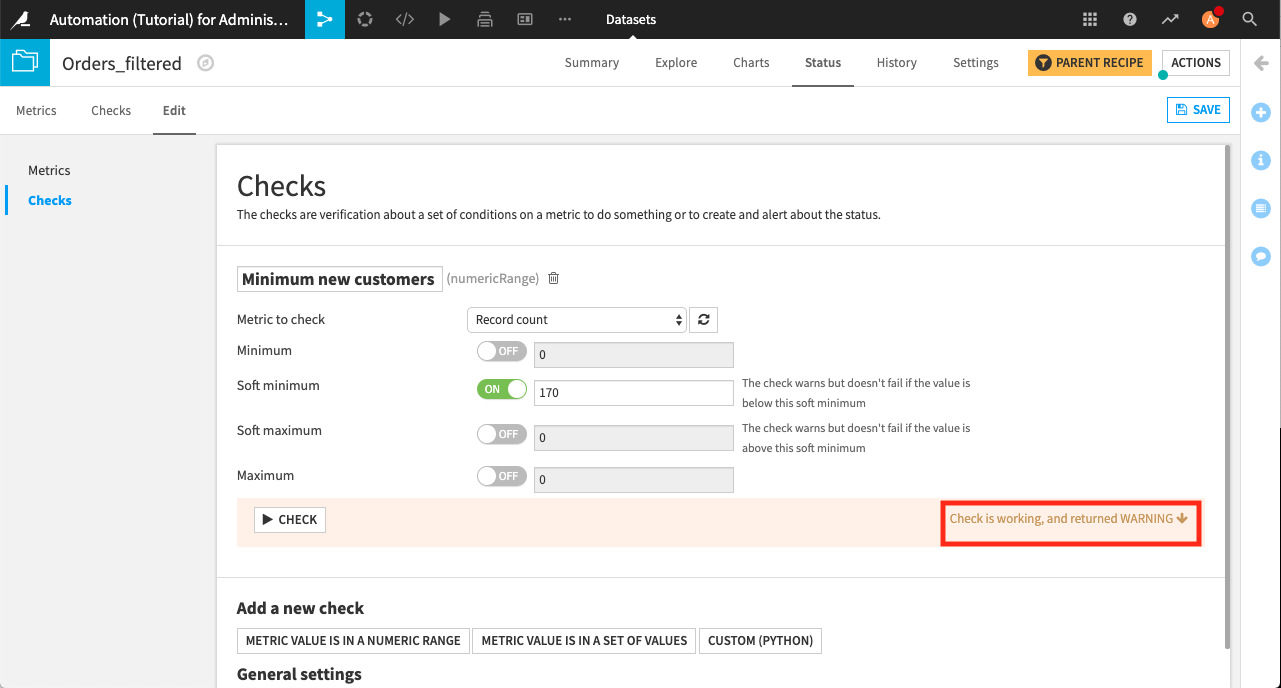 Now we will change the Checks settings so that the job fails (instead of merely giving a warning), when the number of new customers in the dataset is less than 170. To do this: 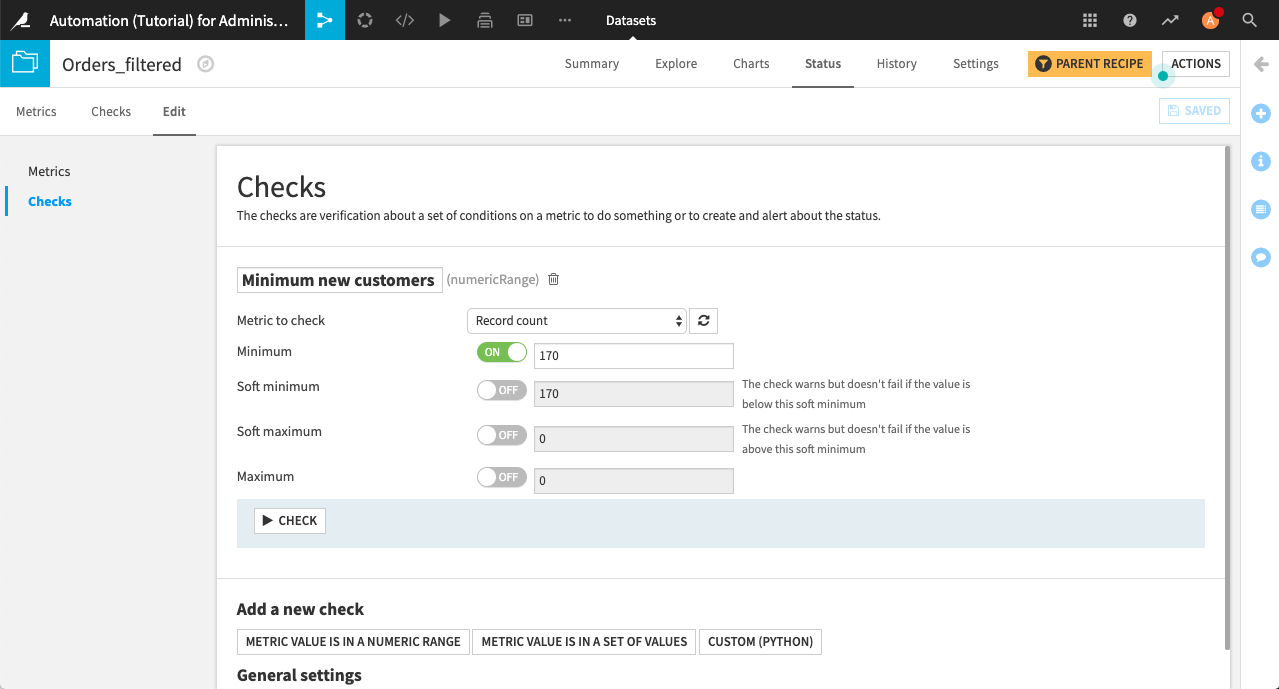 The scenario has a trigger that checks the input datasets: Customers and Orders, and rebuilds the Orders_filtered dataset whenever the input data changes. If you proceed to build the Orders_filtered dataset with the “Build mode” set to Build required datasets (the current setting), DSS will check to see if the source datasets have changed, and will update each dataset in the flow as appropriate.

Because we have not changed the input datasets, rebuilding the Orders_filtered dataset in the current build mode would not actually update the dataset. As a result, the Records count metric would not auto compute, and the Minimum new customers check would not run. 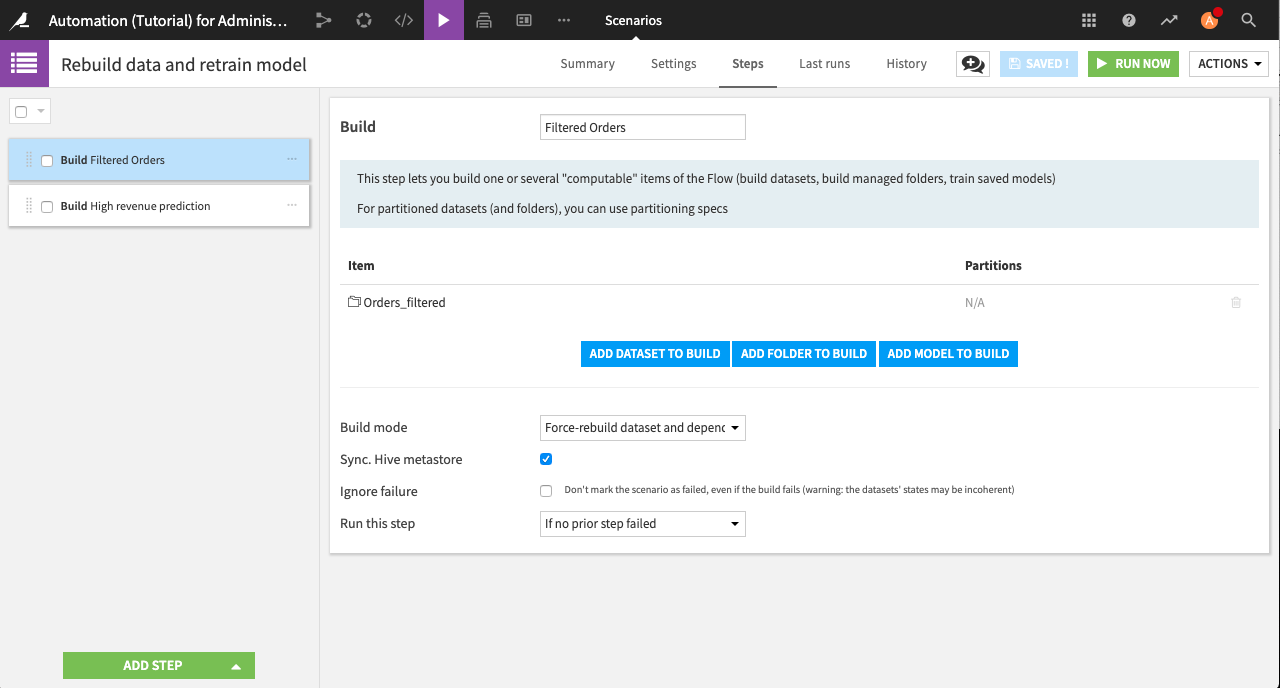 Let’s now test the reporters in our scenario by hitting the Save and Run Now buttons.

Notice that the scenario Rebuild data and retrain model and the job Build Orders_filtered start and soon fail. This is because the checks run as part of a build, and having the check return an ERROR status causes the build to fail. 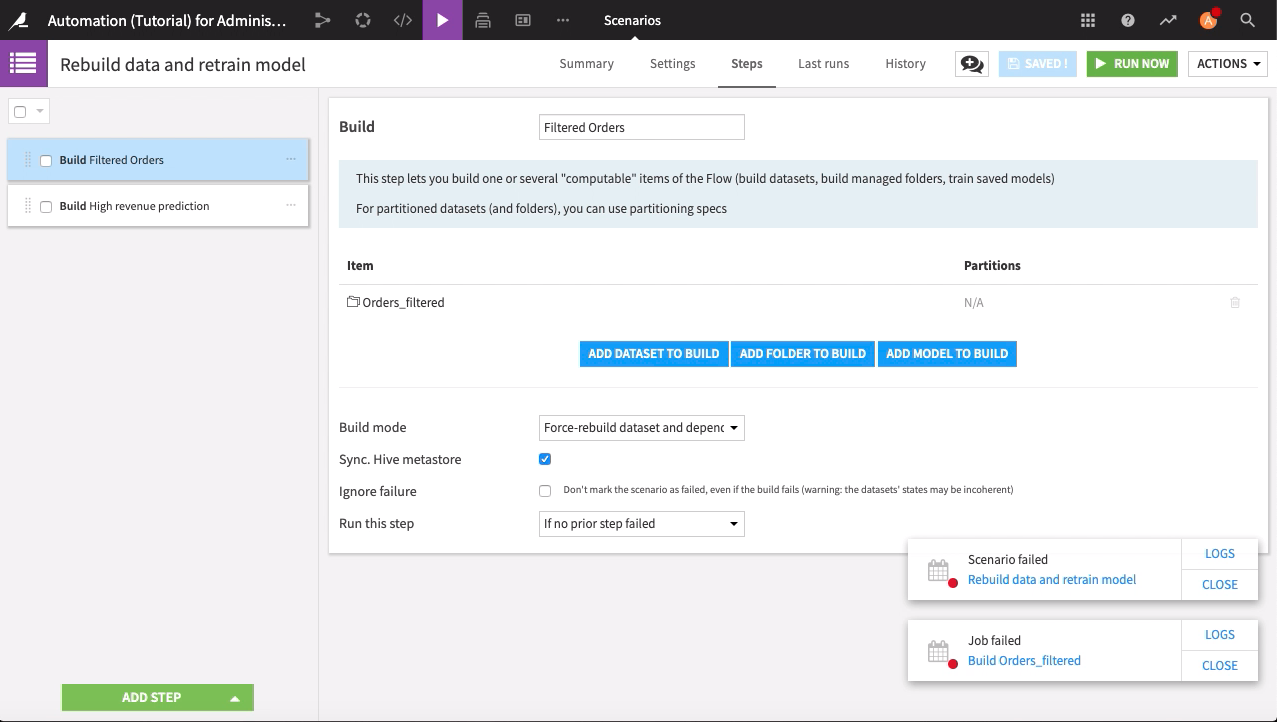 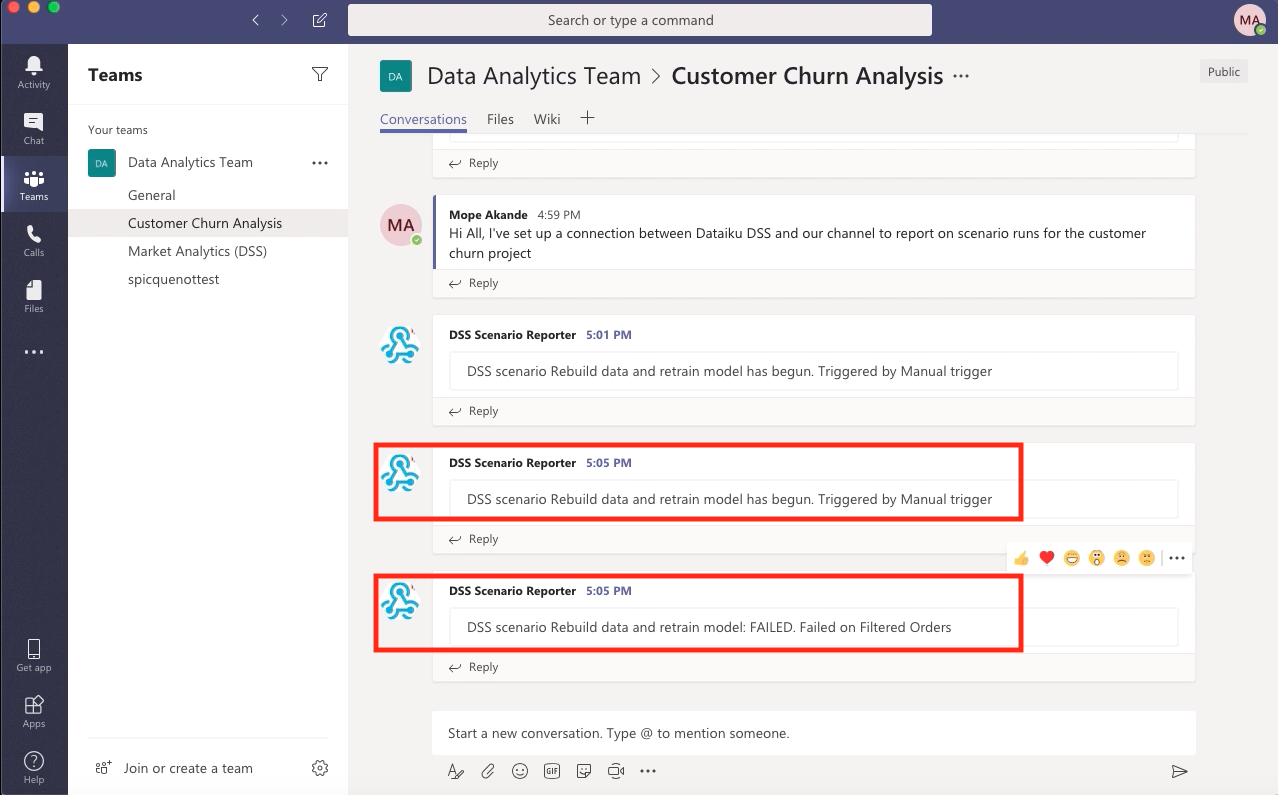 Apart from sending simple messages to a Teams channel, DSS supports Microsoft cards via the scenario reporter. These cards are created with JSON text, and they contain components like images, graphs, and more, to present richly formatted content directly into a Microsoft Teams conversation.

We have now created our first couple of scenario reporters. Thanks for following this tutorial!