Flow Zones help you to organize large Flows so that they are easier to navigate. This tutorial will show you how to:

We’ll use the Haiku Starter project

Looking at the Flow, our general plan for organizing the Flow into zones will be to create a zone for data preparation, and then zones for each branch of the Flow. 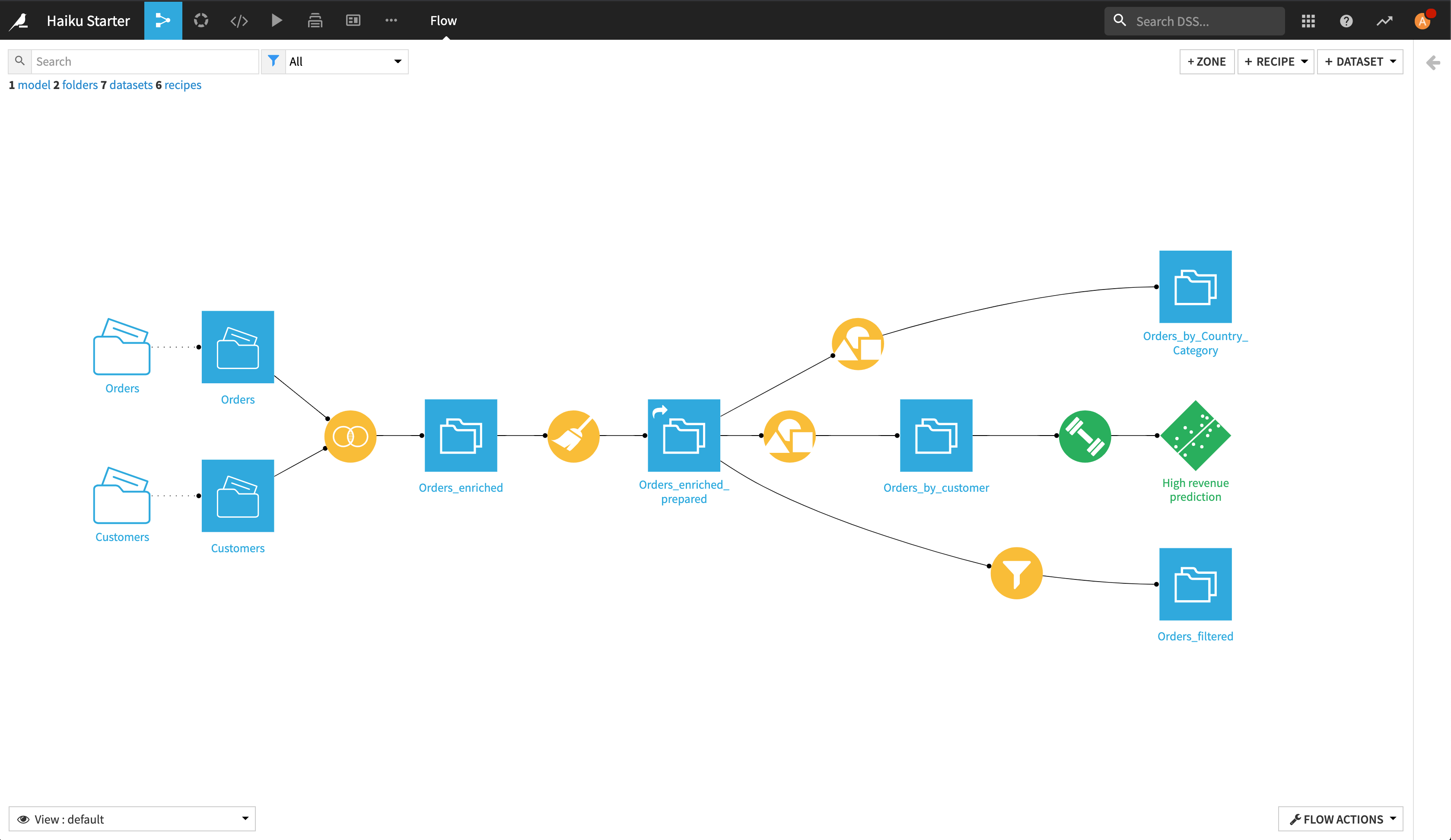 To create your first zone: 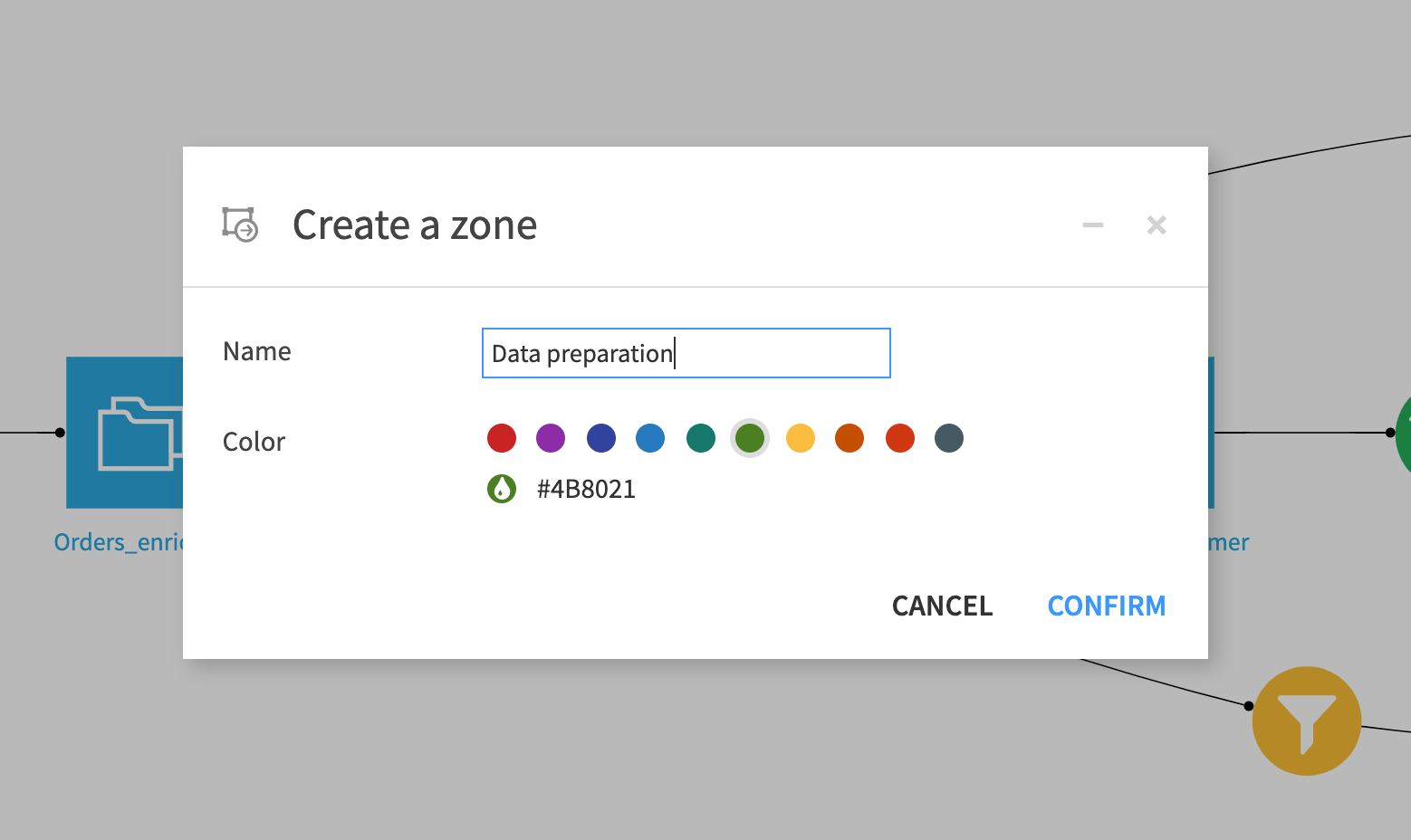 This creates an empty zone named Data preparation, and reveals the Default zone, which contains the rest of the Flow. 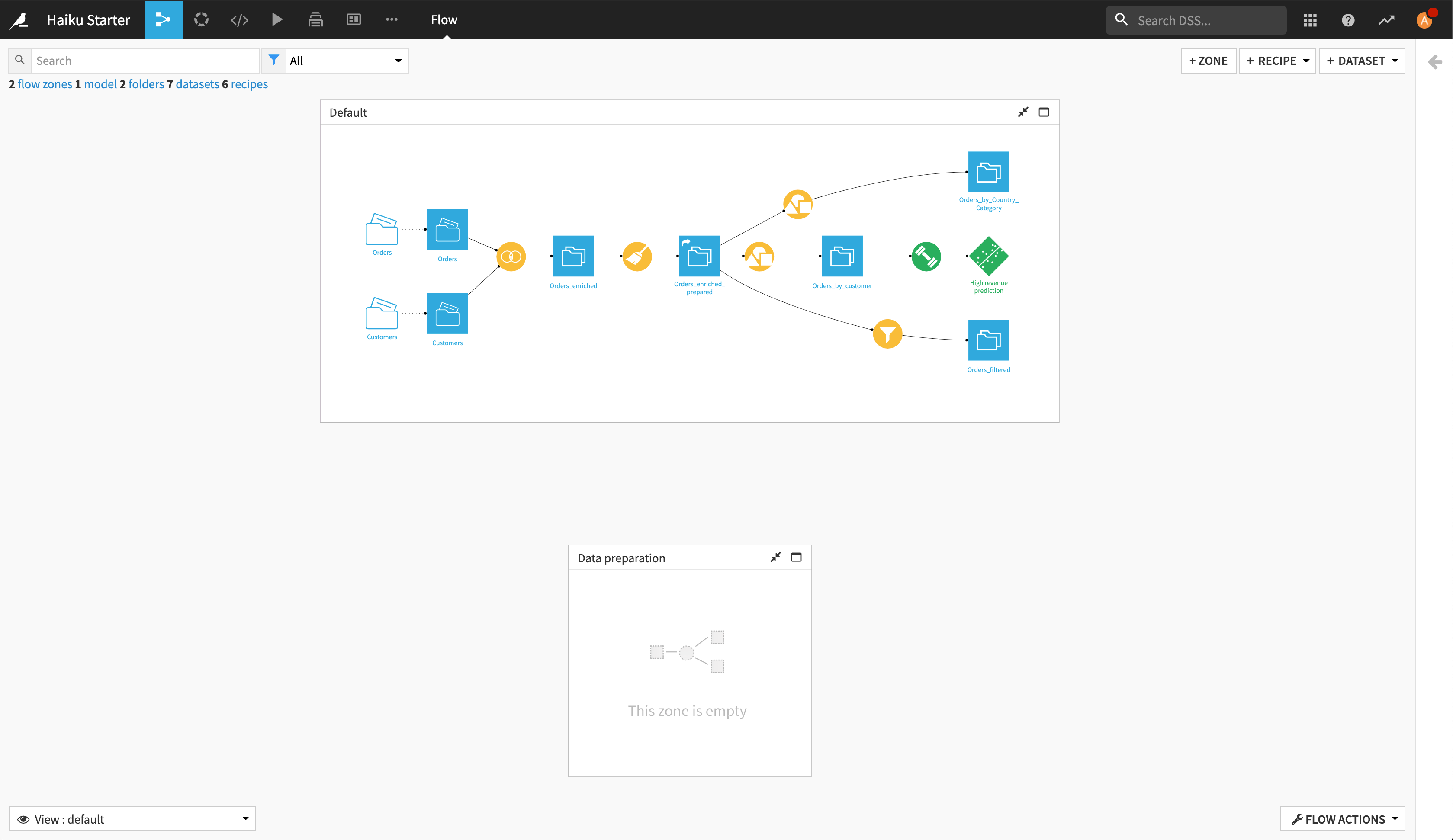 To move objects into the Data preparation flow zone: 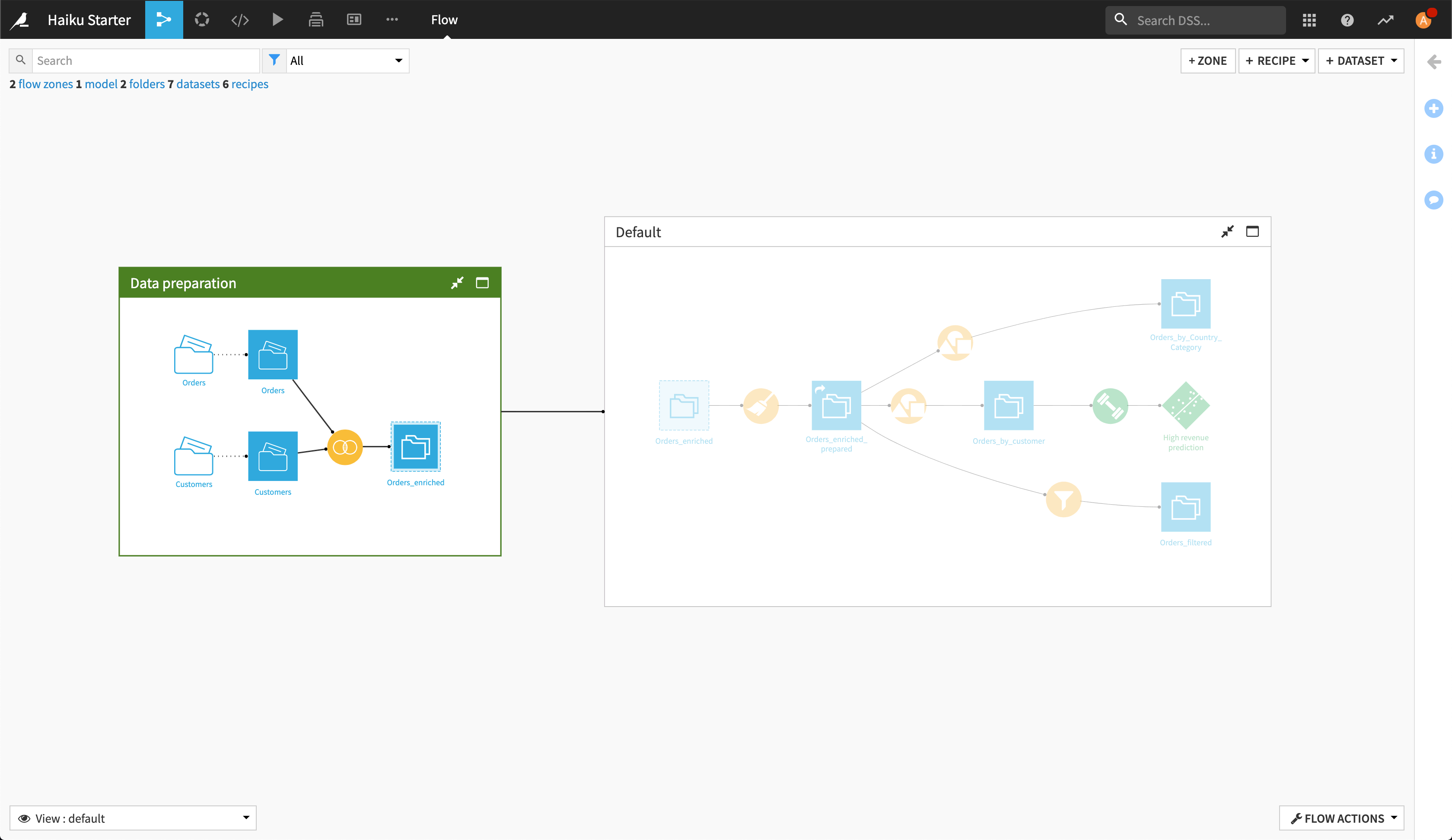 You can create further zones in a similar fashion, or directly from selected objects in the Flow. For example: 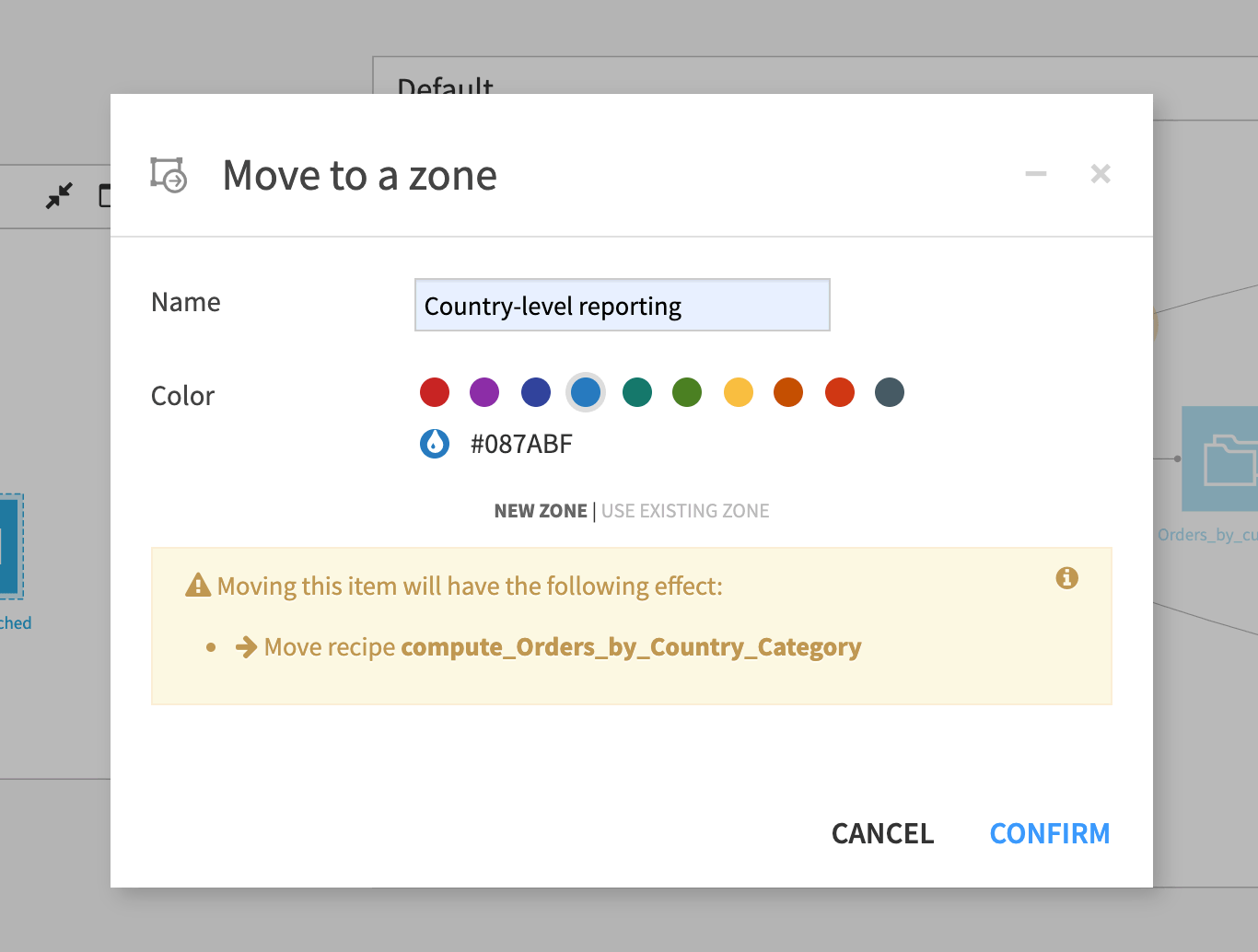 We can immediately see the labeling benefits of Flow Zones. While we may be able to infer the purpose of the datasets (Orders_by_Country_Category and Orders_filtered) from their names, the names of the zones (which contain the parts of the Flow that creates the datasets) provide more descriptive labels that immediately tell us their purpose.

Admittedly, the name of the Find new customers in the last 30 days zone is not entirely accurate, since the Filter recipe finds new customers in the 30 days prior to March 1, 2017. We’ll let it slide now, and regret it in 6 months when we’ve forgotten that we never updated the recipe to use the current date with new data. 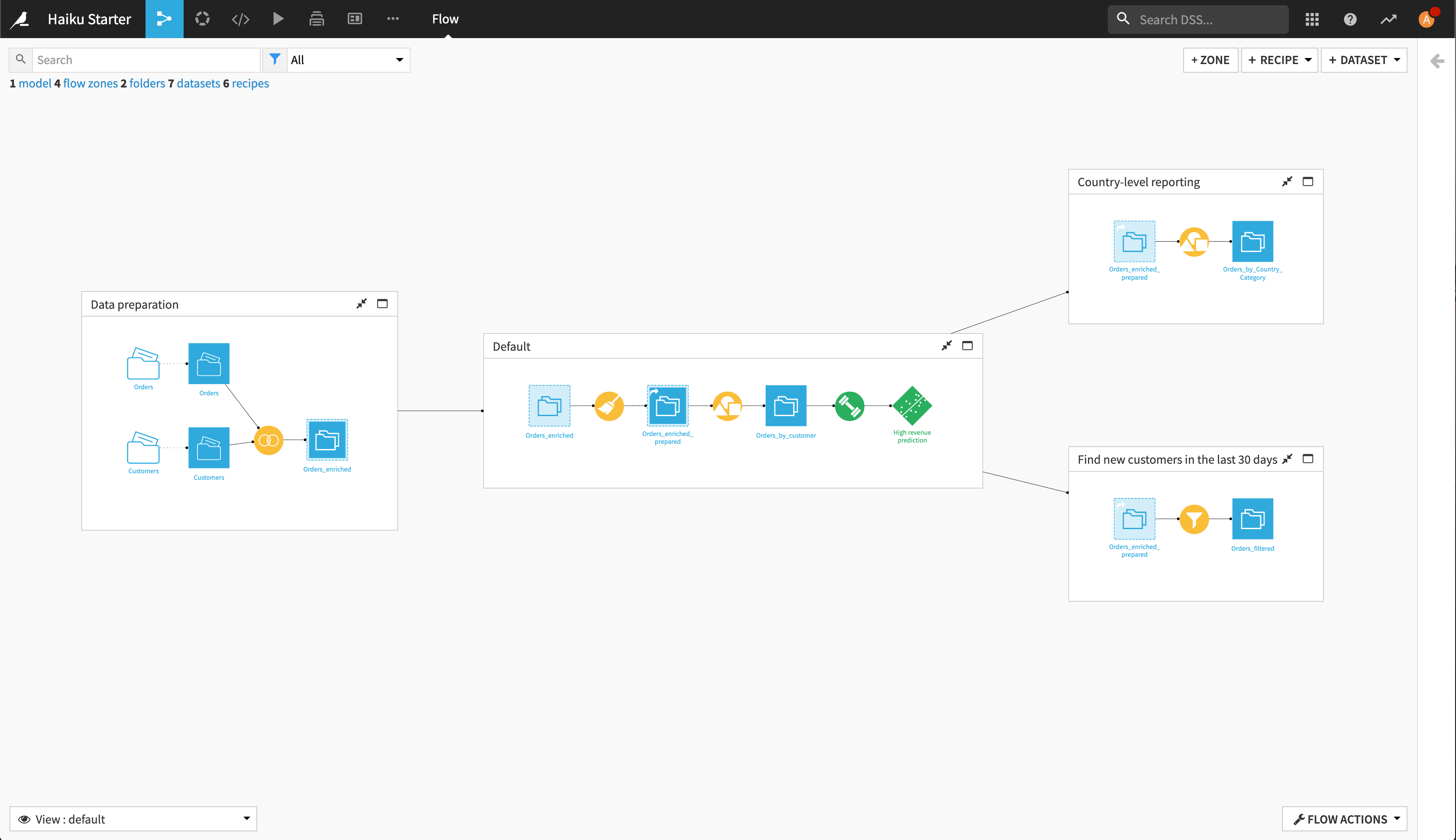 We now realize that we made a mistake when initially populating the Data preparation zone. The positions of the zones are slightly awkward, and the Orders_enriched_prepared dataset really belongs in the Data preparation zone. This is easy to fix by selecting the Orders_enriched_prepared dataset and its parent Prepare recipe and moving them to the correct zone.

Finally, we can rename the Default zone to something more descriptive.

Using Zones to break up the Flow allows you to see things at a higher level of abstraction. This can help to quickly onboard new team members to projects, as they will be able to grasp the overall purpose of the Flow before getting into the details.

There is a special Flow Zone view:

You can thus get a view of the Flow with the zone boxes hidden, but with the Flow objects colored according to their assigned Zone. 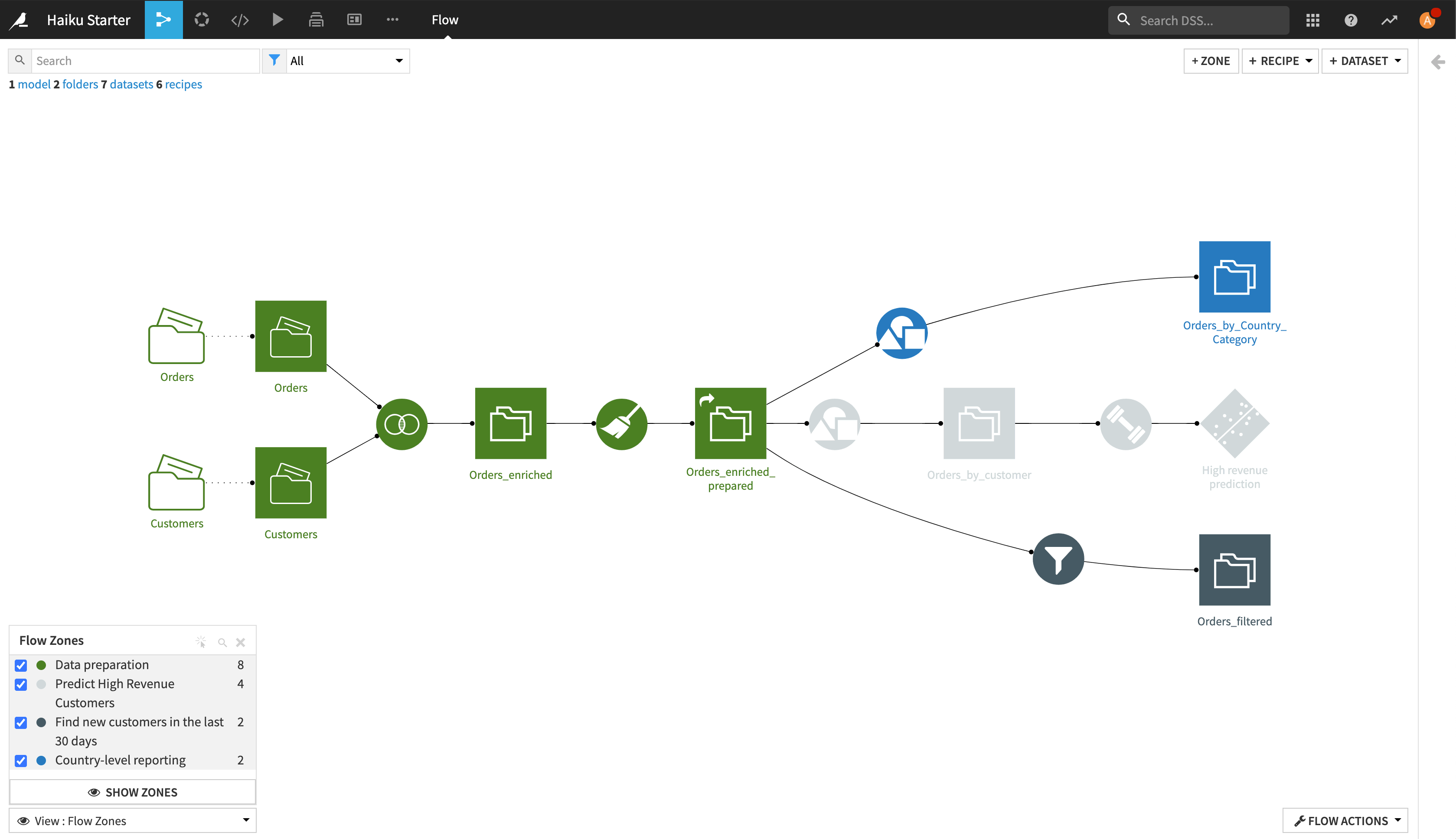 You can also hide the details of zones to avoid distracting from the high-level view of the Flow.

You can then expand individual Zones again when you want to see those details, or all at once. This feature is particularly useful in large Flows with many Zones. 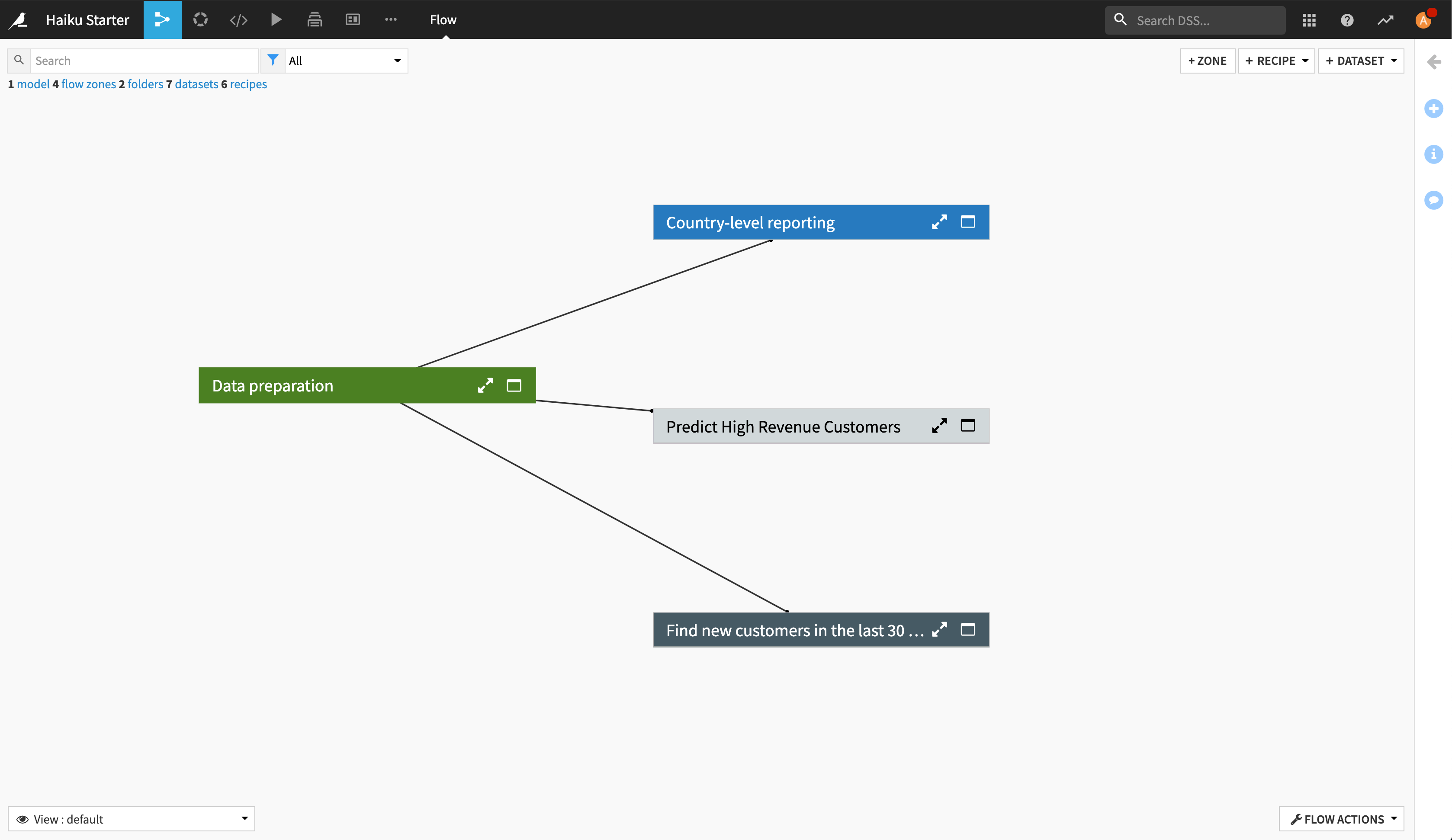 You can zoom in on a Zone to see the details of that part of the Flow.

While zoomed in to the Zone, it’s easier to work with the objects in this part of the Flow. 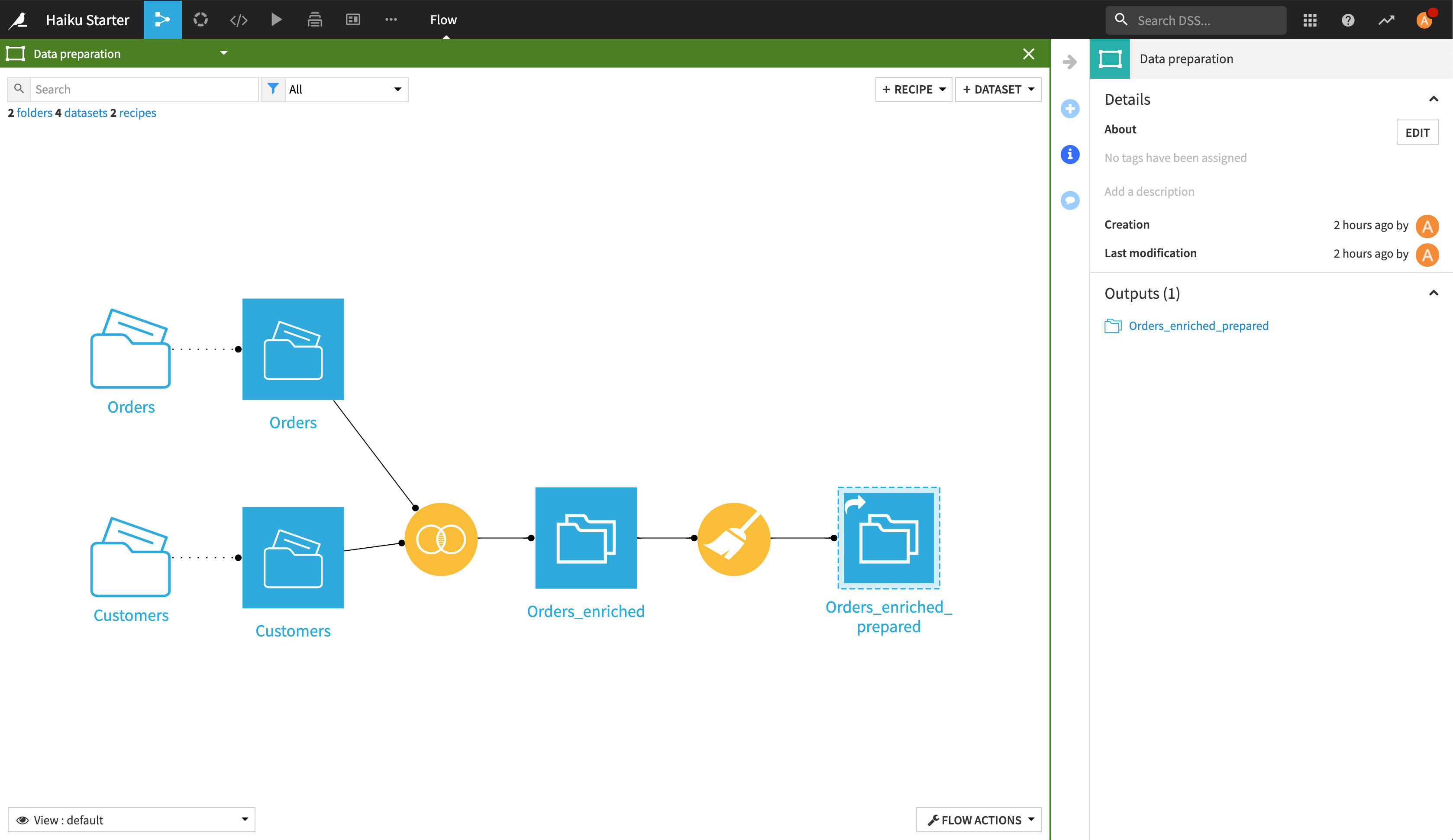 Since they are DSS objects, you can give Flow Zones descriptions and tags, or hold discussions on them. You can access these functions in the right panel, as you can with other Flow objects.

Lastly, you can also use Flow Zones to mark off “experimental” work within a Flow. Simply share, rather than move, the objects that you want to experiment with to a new zone. 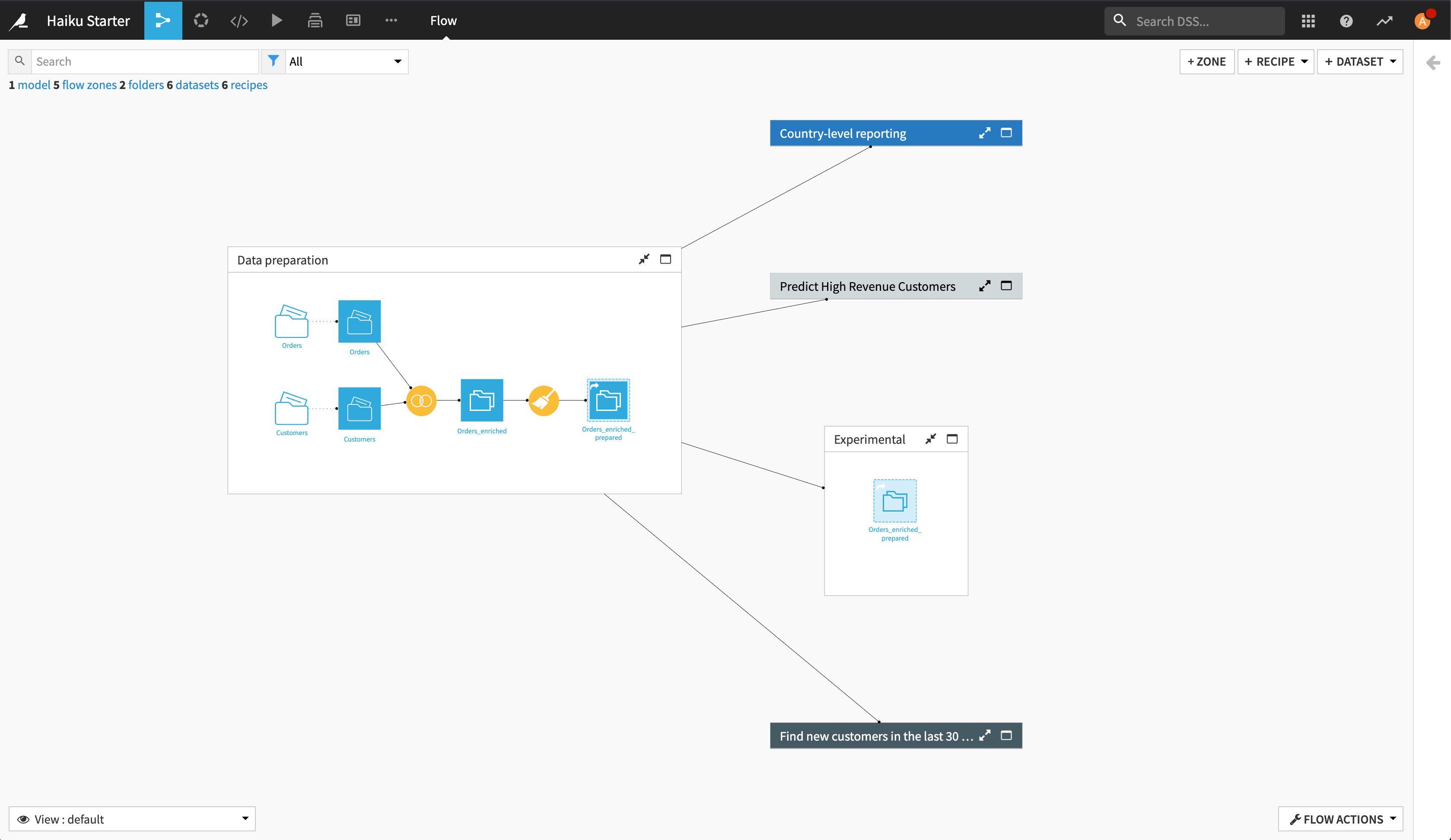